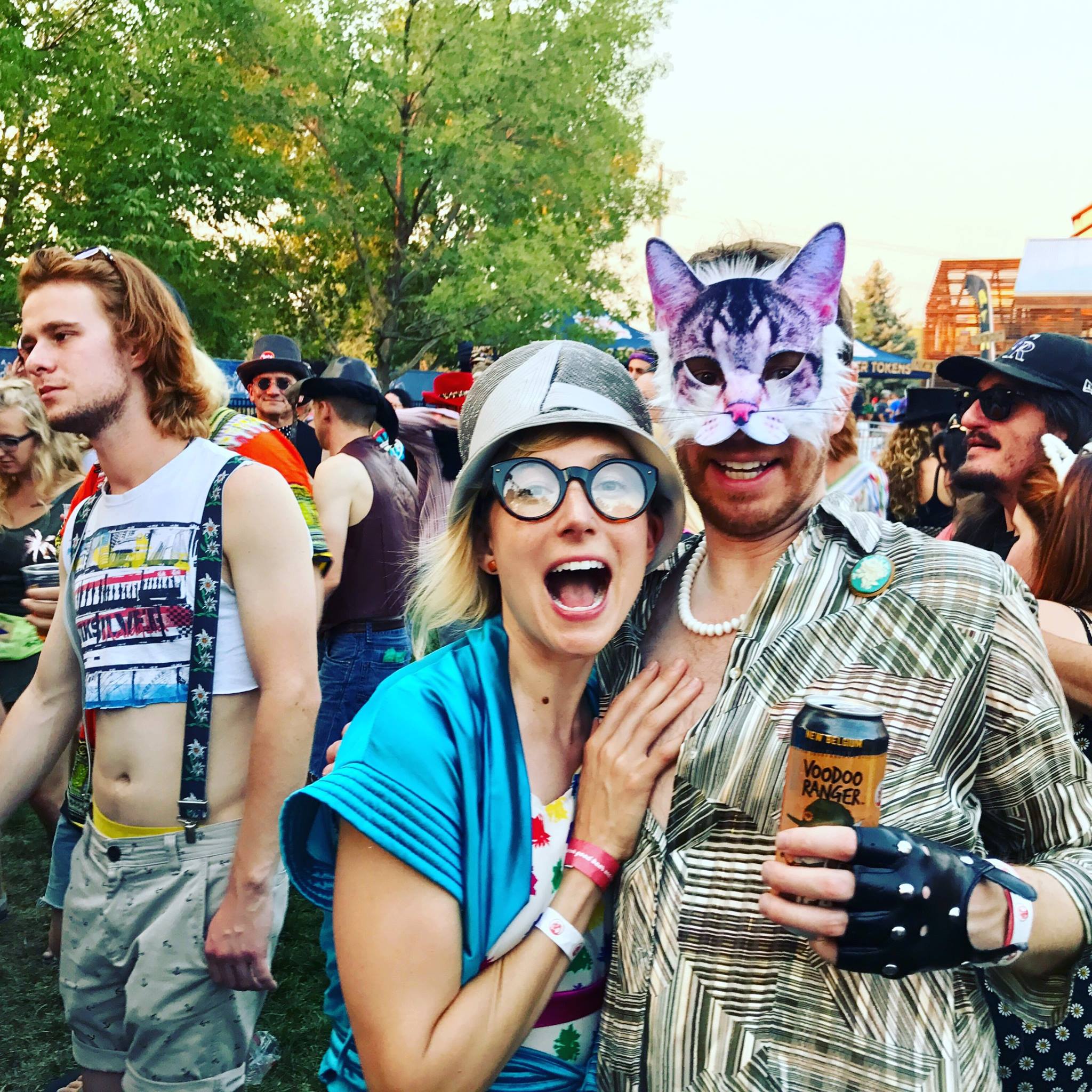 Tour de Fat loudly proclaimed its 19th birthday this year, bringing its collaboration of artists, carnies, and performers to 33 different cities, starting in Asheville, NC on May 20th end ending October 7th in Tempe, AZ. Lace & Lager’s Ali Cornish was able to join the bikes, beer, and bemusement when TDF rolled through the source of all things New Belgium Brewing: Fort Collins.

On Sept 2nd, a perfect late-summer morning, thousands of people convened on the corner of Meldrum and Maple at 10am to launch TDF’s infamous Bike Parade. Hailed by New Belgium Brewing as a “joyful expression of art/transport/traffic” and a “physical manifestation of all things alter ego,” the bike parade summoned droves of colorfully donned debutantes to front yards to watch the whole town pass by on bicycles and creative parade floats. Strangers met over homemade pancakes, shared beers, and became friends. It was inspiring to see everyone together, interacting as a collective creative community, enjoying the beautiful Fort Collins day in pursuit of a happy, playful “Tour de Fat” life – a life emblazoned with New Belgium’s ethos of balance, a life that is slow, deliberate, yet punctuated with spontaneity and ingenuity.

Then, at 3pm, the party changed locations. 8,000 people spanning all ages, styles, races, and generations convened at New Belgium Brewing in Fort Collins. Taking command of the opening ceremonies on the main stage was the legendary Fire Leopard, featuring lead singer Ssssnake, known for their skill at improvising humorous songs about festival patrons. Everyone can agree that the highlight of this event was when lead singer Noah picked out a man dressed as a Golden Girls Biker Cat, (none other than L&L Ali’s husband) and serenaded him for at least four minutes, both on and off the stage.

Next, came the always entertaining and interactive Fashion Show, followed by performances by Imagine Circus and Denver based CITRA. Then, to our surprise, former Impresario and Emcee Matt Kowal made an appearance to judge the Slow Ride! Last year, when Ali was part of the Chicago Beer Geeks, she was able to interview Matt at the Logan Square TDF in Chicago. During the 2016 season, and for many seasons prior to that, he enthusiastically ran the show, made sure the bands were happy, and communicated with staff and volunteers to ensure everything went smoothly. Matt discussed the importance of the Slow Ride, tying the significance of the cruiser bike: “The bike is important,” said Kowal. “It’s a blessing. It’s not a mountain bike, it’s not a specialized bike. It’s a simple bike to have a good, slow time. Not a fast time. Enjoying your time, and keeping it local.”

After the Slow Ride champion was crowned, Fire Leopard charged up the crowed with the Dance Contest, where three hopefuls dance-battled on stage for the privilege to take home a custom New Belgium Beach Cruiser.

Then, two well-known contemporary bands took the stage in succession: X-Ambassadors and All-American Rejects. Instead of bracing the rapidly accumulating crowd of fans, Lace & Lager relocated to the other side of the brewery, where local bands were already stealing the show. Performing on the Fat Tire Belgium White Stage were poetic crooner Brent Cowles, Afro-beat influenced ATOMGA, bluegrass-funkadelic Dragondeer (our favorites), followed by glam-folk artists KOLARS.

All-in-all, Lace & Lager deemed Tour de Fat 2017 a good time. However, we feel that the message of celebrating community and camaraderie was watered down by the festival’s immense size and scope.

The layout of the festival was confusing and it wasn’t easy for most patrons to experience all the events. At one point, people were packed shoulder-shoulder, and we had to abandon our post and retreat to less populated area. The always amazing Le Tigre tent and the roving Sputnik stage were sequestered to the far end of the event, past the largest crowds of people, making it hard for even strong-willed patrons to reach these unique spectacles. Most people didn’t even know that these stages existed.

From our vantage point, we barely got a sense of the values that helped TDF grow and thrive in past years. Lace & Lager has always cherished TDF for its intimacy, its support of local culture, its celebration of the arts, and its mission to give back to the community as well as to support environmental conservation.

When Lace & Lager inquired about the change from free festival to ticketed event (tickets were $25 this year), we were given this response: “This year our ambition was to grow Tour de Fat with the ultimate goal of furthering our philanthropic outreach. With more cities and bigger acts, we felt moving to a paid, ticketed model was the best way to raise more money for our non-profits while keeping Tour de Fat sustainable.”

Even though NBB will be donating proceeds to local non-profits including Bike Fort Collins, Overland Mountain Bike Club, Ft. Collins Bike CO-OP and Ciclismo Youth Foundation, an intentional message of philanthropy wasn’t palpable on September 2nd in Fort Collins. Many would say that Kim Jordan’s promise that TDF’s purpose “to take on real meaning and do some good in the world” in addition to promoting the brand was largely absent from the event.

If it wasn’t for the bike parade, the event would have been an interpreted by some as total loss. As Matt Kowal said at Chicago’s TDF in 2016, “The bike is important. It’s a blessing. It’s a simple [way] to a good, slow time. Not a fast time. Enjoying your time, and keeping it local.” Kim Jordan has always viewed the bicycle as “one of the tools that will save the world, or at least make it more fun and human.” Looking back, we firmly believe that the bike parade was one of the best things about TDF Fort Collins, ‘17. Unfortunately, 31 other cities weren’t able to enjoy parades this year, as NBB wasn’t able to acquire the necessary permits. The only other city to host a bike parade this year was Boise, Idaho.

We hope that New Belgium Brewing will continue to honor its mission of promoting balance and doing good in the world. We have great confidence that the planets will realign next year, and that New Belgium Brewing will restore Tour de Fat to its rightful magnificence, splendid spontaneity, and grassroots grandeur. We envision Tour de Fat restored to its former glory, and that it will resume “shining like a rainbow over a waterfall of ho-hummity” (Kowal, 2016) to the delight of future generations.